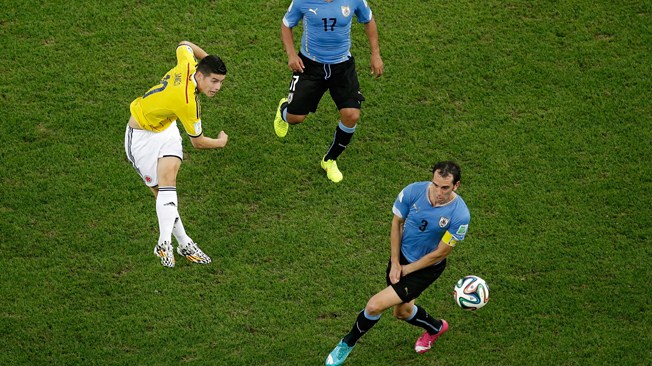 The World Cup may be over for another 4 years but it has certainly left us with some great memories and some of the finest strikes ever seen in the World Cup.  Robin Van Persie’s header against Spain must go down as one of the best headers of all time, while Tim Cahill’s volley against the Dutch was something RVP himself would have been proud of.  While these were both great strikes and up there with Mario Gotze’s World Cup winning goal for goal of the tournament, there could only really be one winner of the goal of the tournament award, and thankfully this time, the award goes to the right person.

Many will feel he was hard done by in not winning the player of the tournament award with Adidas looking after their main man Lionel Messi as the player of the tournament – bullshit!  James Rodriguez caught the attention of the world with his exploits for Colombia as he top scored in the tournament with 6 goals.  Nowhere was his ability shown clearer than his exploits against Uruguay in the last 16 game.  Colombia won 2-0 with Rodriguez scoring both goals to help them progress to the quarters finals where they got beat 2-1 by Brazil.  The first of these goals against Uruguay was sheer individual brilliance as the Uruguayan goalkeeper stood no chance from the moment it left James left peg.  This volley has deservedly been voted the goal of the 2014 World Cup.  The video below shows the strike as it happened in the stadium – enjoy.

I’ve seen many a great strike at World Cups, but this for me is the best yet. Take a bow!!

What was your favourite goal of Brazil 2014?