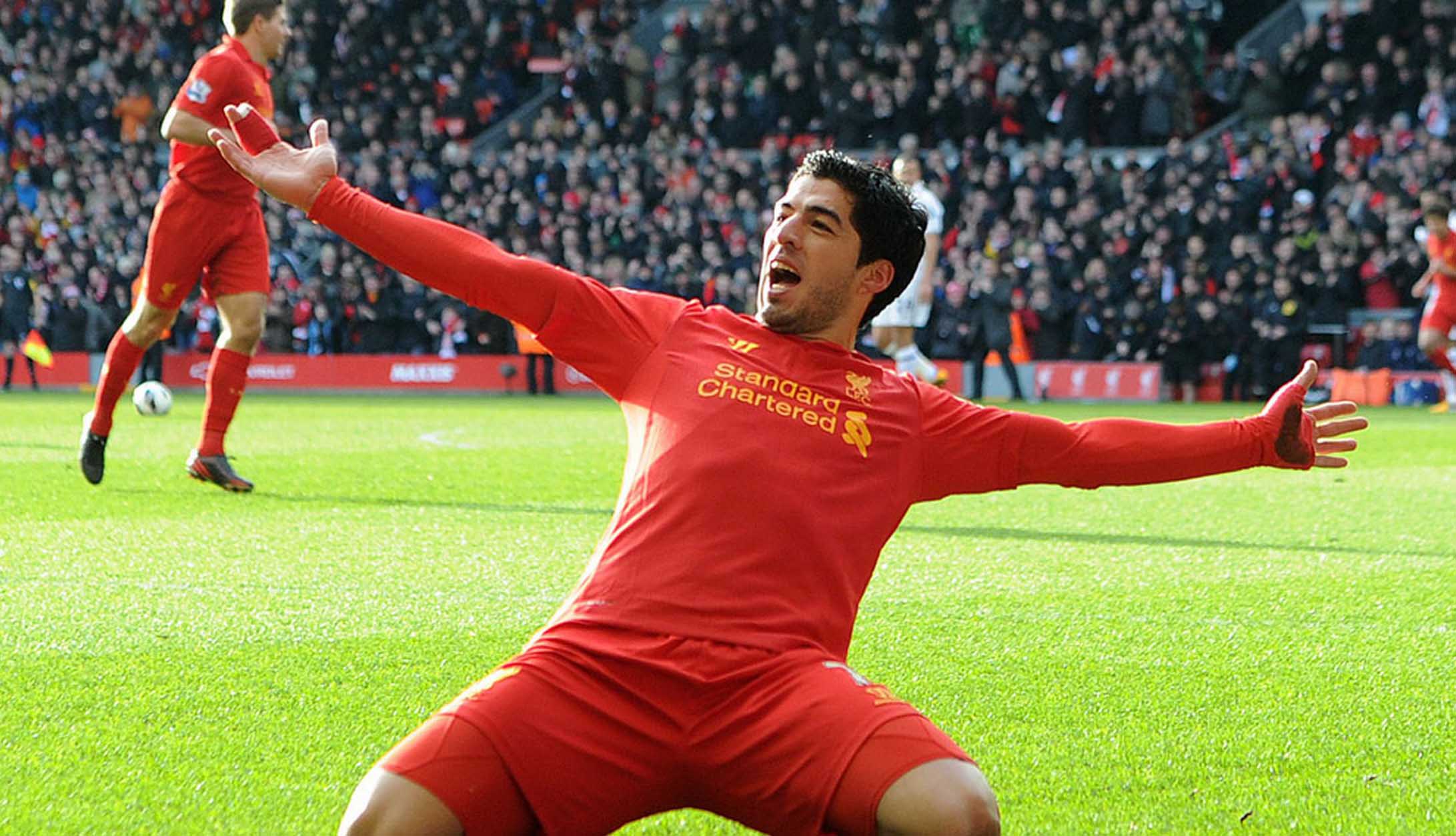 Welcome to the first ever post on The 18 Yard Box.  I’m a big Liverpool fan and look forward to sharing my thoughts on everything that is happening in the English Premier League, as well as Europe’s biggest leagues and competitions.  I also plan to give my thoughts on the latest news making it in the world of football, so where better to start than Liverpool, and the big transfer story of the summer – Luis Suarez transfer from Liverpool to Barcelona.

Was now the right time for Suarez to go?

Liverpool did all they could last year to ensure Suarez stayed at the club, and despite his ban at the start of the year for biting Chelsea’s Branislav Ivanovic, Liverpool where determined to keep their man.  He may have missed the first 5 league games of the season but his form at times last year was up there with Messi and Ronaldo as the best in the world, at times even surpassing the pair.  His form on the field had Liverpool fans dreaming again of a 19th league title, and an elusive first Premier League trophy was only 3 games away.

Alas though it wasn’t meant to be for Liverpool and Suarez, and his reaction after the 3-3 draw against Crystal Palace showed that the league had slipped away, and looking back now, it was a sign that his time at Liverpool was going to end without a league title.  Liverpool managed to finish 2nd last season and ended the campaign as one of the most entertaining sides in Europe, much of this down to Suarez.  By helping guide the club back into Europe’s elite competition, and picking up the European Golden Boot, Suarez showed the world just how good he really is.

His latest biting incident in the World Cup was the last straw for many but I think Liverpool would have struggled to hold on to him regardless.  The long suspension didn’t put Barcelona off the player, and having guided Liverpool back to the holy grail of the top 4, he can leave Liverpool as a man who entertained us all.  Regardless of his misdemeanour’s, of which there were plenty, it was great to see a truly world class player grace the famous green grass at Anfield.  The big task for Brendan Rodgers now is to replace him, but who should he go for.

In short; no, but let’s remember, no one is ever bigger than a club so I’m sure that there will be life after Suarez for Liverpool.  Liverpool have lost players like Keegan, Rush, Fowler, Owen and Torres in the past but always found someone to replace them.  Suarez will be a tougher task as he brought so much to the Liverpool team.  Suarez scored 31 goals and set up 13 so that is 44 goals they need to replace next year, and it will be no easy task.  I would worry for Liverpool and any push for the title next year without Suarez, but they will still certainly be challenging for the top 4.  It will be up to the likes of Sturridge, Sterling and Coutinho to step up even more now that Suarez has moved on.

Who should Liverpool go for to replace Suarez

There’s a number of players being heavily linked with Liverpool at the minute with Swansea’s Wilfried Bony and Lazar Markovic of Benfica covering plenty of inches in the gossip columns in recent days.  I expect the Markovic deal to go through while Bony could yet move to Tottenham Hotspurs.  Either way, I don’t think either of these players will be a direct replacement for Suarez.  Markovic will be a player for the future who fits the current transfer policy at Liverpool for signing young, talented players.  Bony is a player in the Didier Drogba mould and not someone who will offer the same displays as Suarez, but would be a good signing nonetheless.

Other attacking players being linked with Liverpool include Barcelona’s Pedro and Antoine Griezmann from Real Sociedad.  Both players would be great options in attack and represent a step in the right direction.  Looking at other players that may potentially be available this summer, James Rodriguez and Marco Reus are the standout players.  My feelings here however are that, as with Alexis Sanchez, Liverpool just might not appear that attractive, despite being in the Champions League.  Rodgers has a tough task ahead finding someone to replace Suarez and it may take Liverpool a number of years to even come close.  It’s also important that Rodgers and Liverpool learn from Tottenham Hotspurs last year and avoid signing many players to replace one.  It’s time to go for quality rather than quantity.

My thoughts on the player to replace Suarez in the Liverpool team; well he’s already at Anfield.  I think Liverpool have in Raheem Sterling, a potential world class player who has shown for both club and country that he can become one of the world’s best in the coming years.  He looks comfortable on the wing or in the hole and also seems to have finally found form infront of goal, with 9 premier league goals and 6 assists in 2013/14.

Chelsea, Arsenal and Man Utd have all added good quality to their squads while Man City are yet to really do anything.  With Suarez gone, Liverpool’s start to the campaign is vital.  They started well last year and the same will be needed this year if they are to mount any serious title challenge.  My thoughts are that Liverpool, Arsenal, Man Utd and Tottenham Hotspurs will all be battling it out for 3rd and 4th, while Chelsea and Man City do battle for the title.  I could be wrong, but an interesting season lies ahead.

How do you think Liverpool will cope without Luis Suarez?

With the new English Premier League season just over a month away, how do you think Liverpool will cope without Luis Suarez and where will they finish this upcoming season?  Let me know your thoughts by commenting below or giving me a shout on Facebook or Twitter.