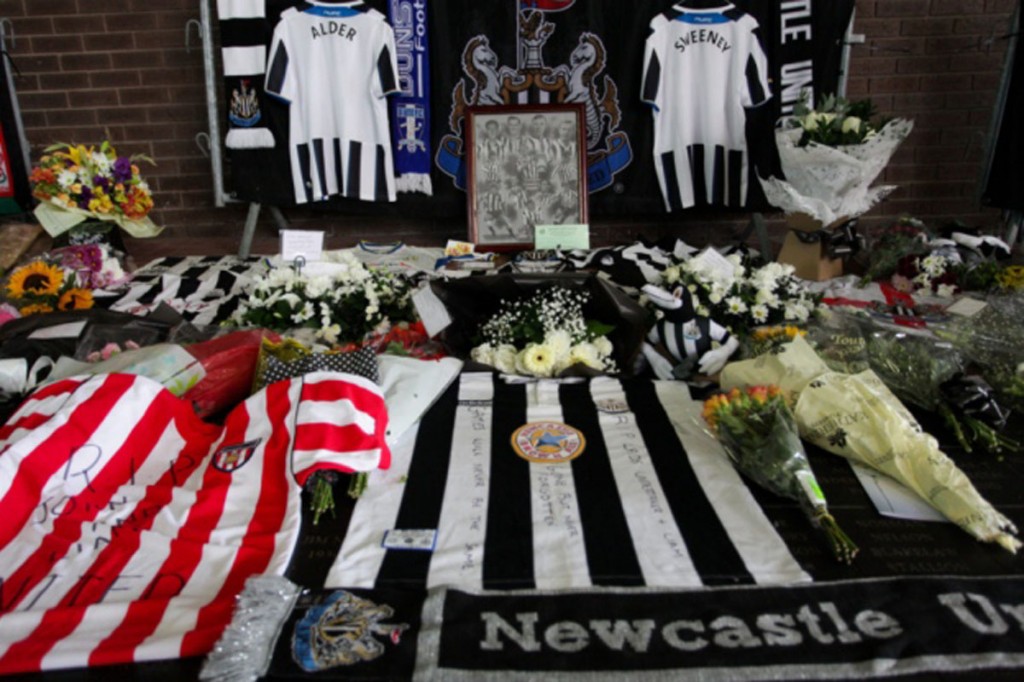 The body of Liam Sweeney, one of the two Newcastle fans murdered along with hundreds of others aboard Malaysian Airlines MH17 has been identified this week.

To many the most amazing thing about the tragic death Liam and John Alder, both Black and White to the core, has been the response of the Red and Whites – Sunderland fans. A message board post that originally intended to raise enough money from Sunderland fans for a floral tribute has raised over £30,000 at the time of writing.

This has caused many keyboard warriors and amateur social media pundits (ok, I fall into those two categories too) to express surprise that sworn enemies from Tyne and Wear can come together at tough times.

First of all, for all the animosity between Newcastle and Sunderland fans (more on this later), let’s not forget that as well as Newcastle United fans, Adler and Sweeney were sons, husbands, brothers, cousins, work mates, friends and drinking buddies to lots of people. The response from Sunderland fans isn’t about Newcastle fans, it’s about football fans going to watch their team and not coming home. It’s a human response.

There is, undoubtedly, passion, banter, rivalry and jealousy between the two sets of fans. It does sometimes boil over into trouble with a handful of nuggets fighting anyone who gets into their line of sight, including, occasionally, horses.

But the media portrayal of this fuels the popular myth that everyone in Sunderland hates everyone in Newcastle and vice versa. It’s simply not the case. St James’ Park holds over 52,000 fans and the Stadium of Light holds around 49,000 – when was the last time you saw 49,000 people brawling on the streets? It just doesn’t happen.

In my experience Geordies and Mackems live happily side by side. They joke with each other, mock each other and take the piss out of each other’s teams. In many ways it’s a relationship borne out of necessity; they need each other for the rivalry to thrive. Without them, they’d just be Chelsea fans.

When either team is in danger of being relegated (an almost annual event), the fans of the other team shout and tease about the impending doom. But, behind the abuse, the real fans want the other team to stay up. They need the rivalry to make the football matter more – ask Celtic fans what it’s like in Scotland at the minute with Rangers down in the dumps.

The perceived animosity between the fans has also influenced police policy towards the game. In recent years, the only way away fans can travel to a game is to head to their home ground, be pushed onto officially transport and driven to the opposition ground. All for their own safety apparently. It’s an approach that criminalises all fans, even those with no intent or record of causing trouble.

Hopefully the recent fundraising by Sunderland fans will start to change the perception of the rivalry between these two great clubs. It’s a rivalry, a bloody big and intense one, but the hatred is confined to a few idiots who can barely spell the name of their favourite club… don’t punish the majority because of the lunatic minority.

Andi Jarvis is a sports marketing professional and fan who has failed at his many attempts to be a sports man. With a degree in Sport Management, plus years of experience as Marketing Manager in professional cricket, Andi has made a career from sport as well as watching from the stands. From the rugby league ‘heartland’ of Bradford he has played – with varying degrees of success – league, union, football, cricket, netball (really) and Gaelic football. Andi is also a regular contributor to the Round Eight sports blog.