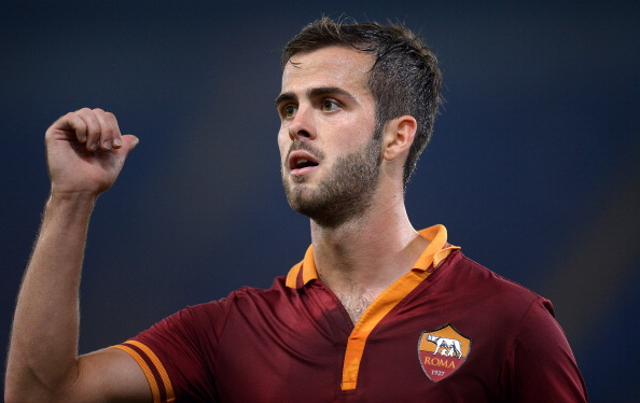 Pre season friendlies are big business today with clubs travelling all over the world to play tournaments in front of a growing global audience.  USA, Australia and Asia are all popular destinations for summer friendly games as most of Europe’s top teams enjoy the huge commercial and financial benefits of these games.  One such tour is the Guinness International Champions Cup with Manchester United, Liverpool, Manchester City, Real Madrid, Roma, AC Milan, Inter Milan and Olympiakos.

Manchester United are currently in America as part of the 2014 Pre Season Tour and after beating LA Galaxy 7-0 in their opening game, Van Gaal’s boys followed this up with a 3-2 victory over AS Roma.  First half goals from Wayne Rooney (2) and Juan Mata gave United a convincing lead at the break but Roma got back into the game thanks to goals from Pjanic and Totti although it was a case of too little too late for the Italians.

Pjanic does a Beckham on Man Utd

The highlight of the game was the second half goal from Roma’s Bosnian start Miralem Pjanic.  Pjanic is one of the stars of the Roma team and obviously got a little fed up passing the ball about that he decided to casually knock the ball in from his own half.  Pjanic received the ball just inside his own half and with United goalkeeper Ben Amos standing off his line, Pjanic scored with an audacious effort that really highlighted all the talent this guy has.  Take a look at the impressive strike below.

The day before this game with Manchester United, Pjanic and his Roma team mates including former Chelsea player Ashley Cole, joined American Football side the Denver Broncos for a training session.  Pjanic scored an impressive 50 yard field goal, so I think it’s pretty clear to see that this is what give him the inspiration for the wonder strike against Man Utd.  I’m sure if things don’t work out for Pjanic in soccer, he could always go across the pond and make it as a field goal specialist!